Regular blog readers will know that 2014 was an incredible season on Langholm moor. A mild winter and incredibly high vole numbers were perhaps the triggers for an excellent breeding season for many raptors including  Hen Harriers and Short Eared Owls. The moor welcomed many visitors to perch on the roadside and watch the wonderful views of birds  all around; one such visitor became a semi-permanent feature on the roadside. .  we called him 'the owl man'.
I hope you enjoy this guest blog by Bryan Benn aka (The owl man) 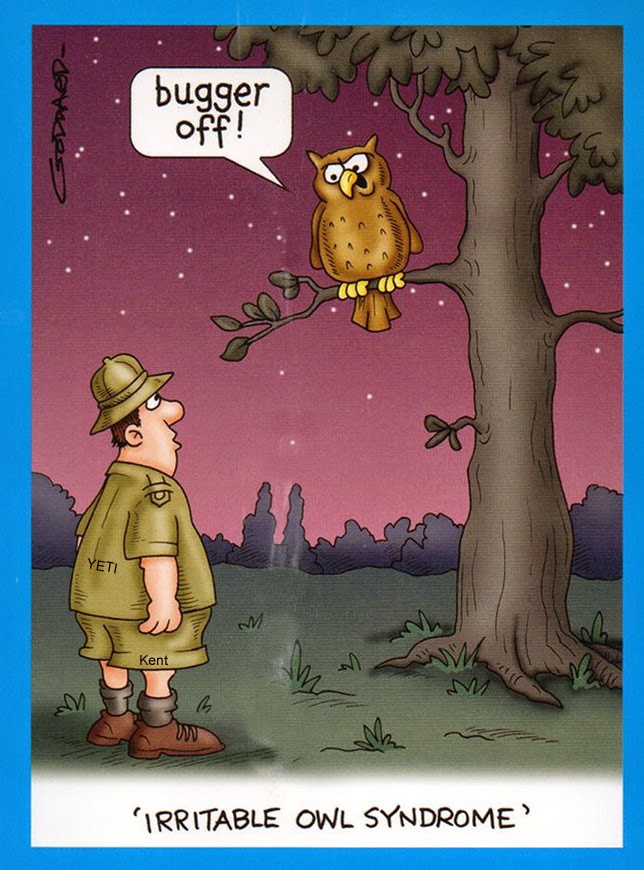 
In recent years I have developed an almost obsessional love for owls, especially Short-eareds. I am now approaching four years in maybe a seven to eight year period of time writing a book about those beautiful lemon-yellow eyed creatures. I’m not a life long birder, indeed I still describe my identification skills for our feathered friends as being OK for Sparrows and Albatrosses, but still pretty useless for those falling in between! After I lost my wife a good friend introduced me to birding as a way of trying to fill a big gap in my life and the first ”unusual” bird we saw was a Short-eared owl, slowly hopping from post to post in front as we drove an Isle of Sheppey, (Kent), marsh road at walking pace. An amazing and beautiful creature about which I soon developed an insatiable desire to find out all I could. Plenty of scientific papers written on various aspects of their lives, but no book. So I decided to write one myself, and thus started the long road that eventually saw me arrive on Langholm Moor on 23rd May last year.


A road that has already seen me spend vast amounts of time observing and photographing Short-eared owls, (and any other owls that came close), as well as driving to many locations around the British Isles to broaden my knowledge and understanding of them. From South Wales to the Outer Hebrides, Salisbury Plain to the Orkneys and many other places in between. I have seen and learned much and received a great deal of help, (especially on the Orkneys earlier this year), but nothing substantial on breeding season activity. Until I came to Langholm Moor in 2014.


My first visit to Langholm in May was thanks to Sonja Ludwig who had responded very quickly to one of many requests I sent out to various organisations for help with my Shortie breeding season field work. She told me 2014 was an exceptional year for these owls breeding on the moor and on arrival I was immediately watching various males hurrying about feeding their females and the hatched young. As well as vigorously defending their well defined territories from adjoining males and indeed any bird seen as a likely threat to their food supply, (primarily voles), and the young owlets. 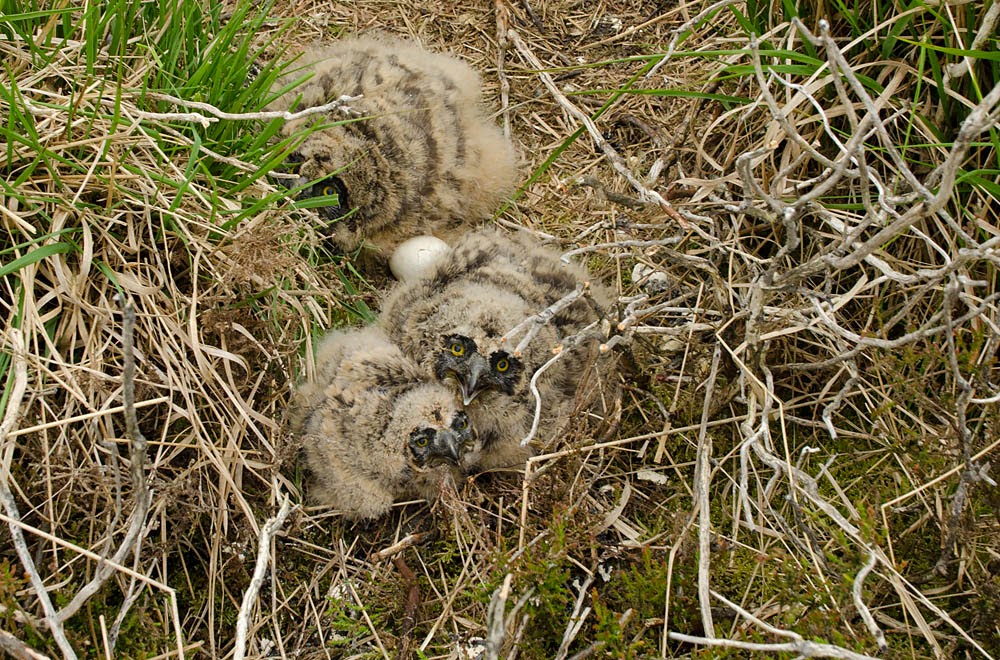 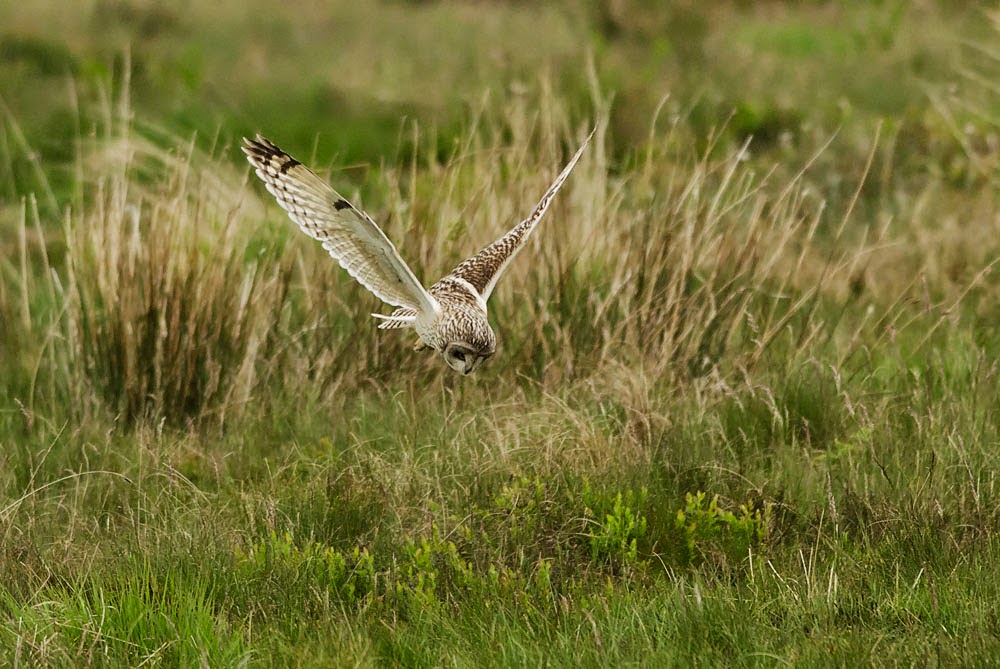 On just my second day Mac Hotson and Sonja, (members of the raptor study group), allowed me to accompany them to a Short-eared owl nest where they were scheduled to ring the owlets.


That nest visit saw the male making his distraction display as we got close: a variation of the broken wing display used by a number of other birds. The female stayed on the very rudimentary nest in amongst some taller grasses, (Shorties are ground nesting owls), until we were almost upon her, leaving three young owlets to be rung. Two were healthy sizes and looked in good shape, one was clearly not and the verdict from Mac and Sonja was that it would not survive long. Close by was a 12 day old owlet that had already started it’s wandering from the nest. As ground nesting owls part of their survival strategy is for the young to leave the nest very early and spread out in the adjoining habitat, thus allowing at least some to survive if a predator such as a fox finds the nest. That means the adults have to be good not only at making a number of kills each day to feed them, but also at finding their wandering young who can be up to 200 metres from the nest as they grow. That process is helped by the young making lots of food begging hisses when the adults are flying near, a sound that characterised that part of the breeding cycle over much of the moor.

From then onwards in what became numerous trips from Kent to Scotland, I spent a great deal of time on a moorland road watching a number of breeding territories whilst always making sure I minimised any disruption to the very friendly local people, the owls, and I kept well away from the many Hen Harriers breeding there. Visible activity peaked from mid June to early July as the juvenile owls started to fly, but were still dependant on the adults for food. Meaning very hard work for the adults and not very good news for the many voles on the moor. Large numbers of those latter creatures, (their numbers are cyclical), was the reason for the good number of Short-eared owls breeding on the moor in 2014. A more normal level of voles would see only a small number of owls, and they would be very thinly spread. 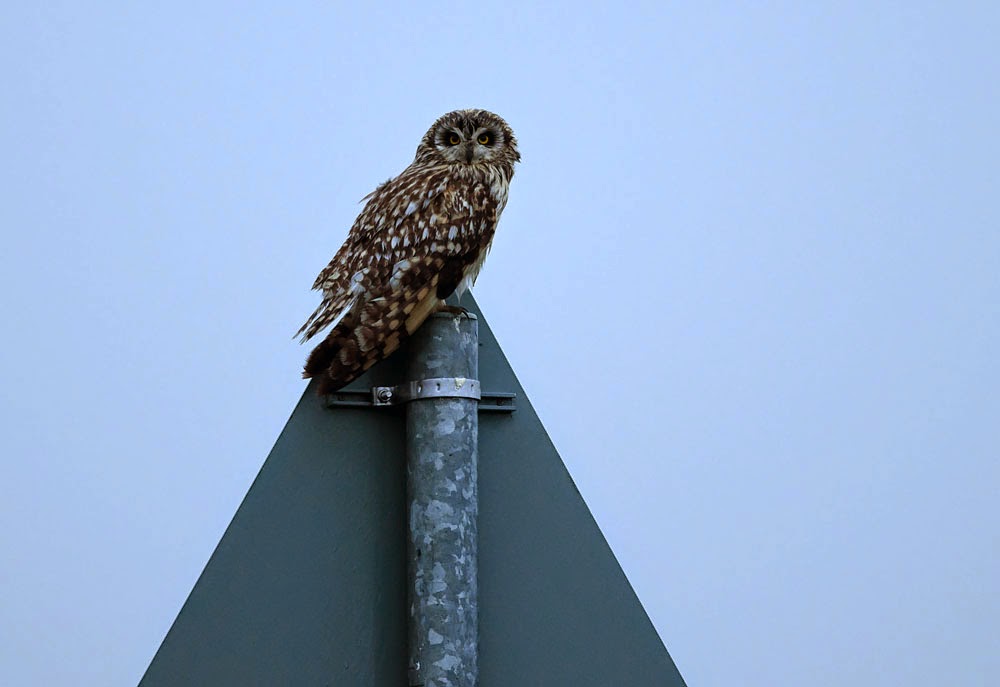 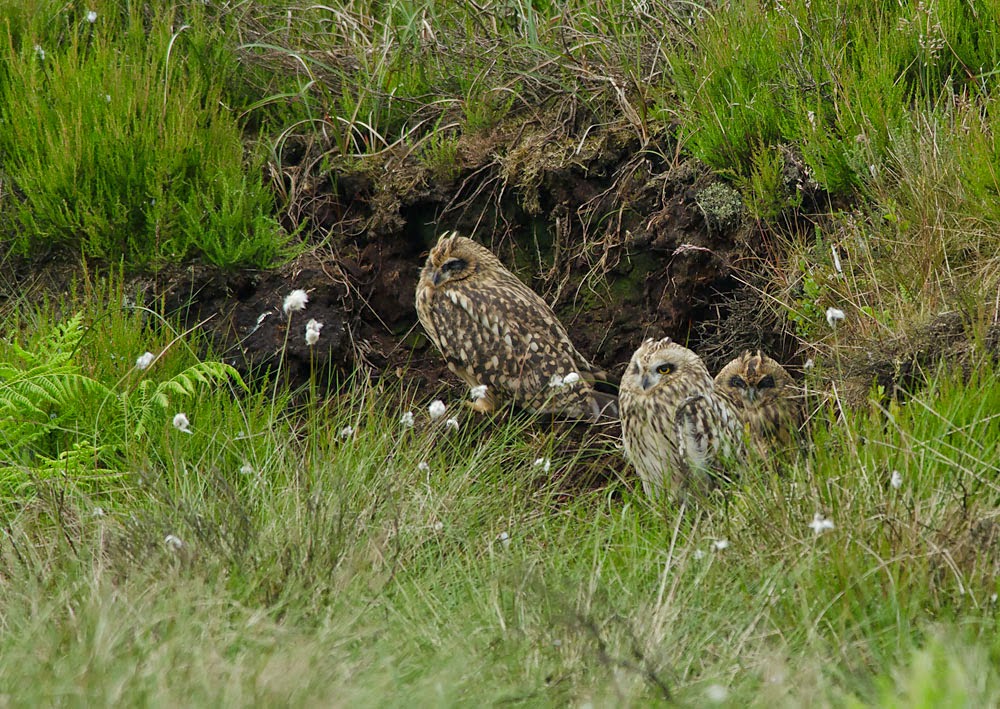 June saw the juveniles flying, often together as a family unit as they emerged in the evenings from their daytime roosts: all these owls showing a distinct preference for nocturnal activity. Something not that widely realised by those who only watch their daylight activities in the winter months on coastal marshes and lowland in other parts of Britain.  All too soon the sights of several young lined up on fences where they exist on the moor waiting their first feed of the evening was just a memory as they became well and truly fledged, fending for themselves.

Then, from late July and continuing into October, the owls started to disperse from their breeding territories. A few maybe just across the moor before a final departure, but with the majority no doubt heading directly South to seek milder over wintering areas in Britain. With some possibly going much further South than our shores in search of an area where adverse winter weather does not stop easy access to a reliable food supply.  A very few stayed into November, becoming hard to find due to their continuing nocturnal behaviour.  It will be touch and go if those few stay on the moor or if any reduction in voles and/or bad weather forces them to leave too.

My visits have continued as I need to record the owls’ departures and the empty areas of moor where only a few months earlier I was so regularly finding these beautiful creatures in good numbers. A sadness at times seeing the emptiness.  But an understanding and appreciation that all those who work on Langholm Moor on the project have created an environment with the side effect of helping swell the British population of Short-eared owls. 2014 has been exceptional I know due to the large number of voles, but I do hope that 2015 and future years still see at least some of these lovely owls choosing to breed in such a wonderful and friendly part of Scotland.