Annie, Grainne and Hattie have made no significant movements in the last week but within the last couple of days Sid has made a determined journey (approx 117km) south across the border in to Northern England. He has currently in the beautiful county of North Yorkshire, near Hawes. 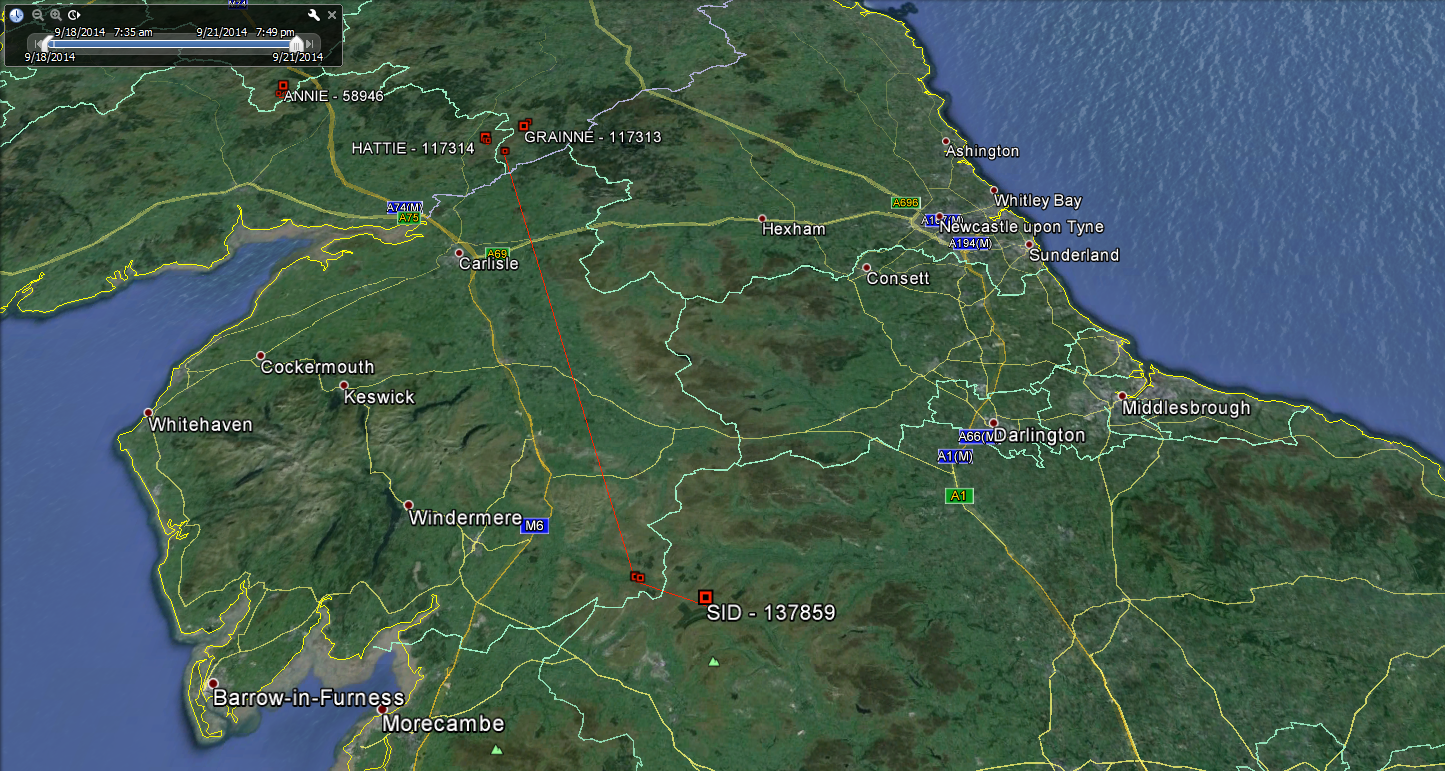 Posted by catbarlow at 09:57 No comments:

In the time it has taken me to write the blog (below) and upload photos, Sid's latest data have come in. He is not following in Miranda's footsteps and heading west across D&G, he has done a U-turn and is heading back towards the Scottish Borders.. !!

It may be mid September but it is feeling more like mid July here in Langholm. We've been experiencing sunny, warm days,  even managing 23 degrees one day. Barely a drop of rain means the rivers are the lowest we've seen them in a long while and the moor is about as dry as it gets (which admittedly is still pretty wet). It has been about a month since we've seen swifts wheeling overhead but the swallows and martins are still actively feeding young. Finches and pipits moving about together in large flocks feeding on the thistles and meadowsweet.
Vole numbers appear to still be pretty high, It is hard not to tread on them as you walk through the heather, grasses and rushes. Several pairs of Barn owls are on second broods (some feeding large chicks, some still sat on eggs). On the Harrier front the girls (Hattie, Grainne and Annie) have not made any major changes in recent weeks but Sid (the young male tagged at Langholm this year) is heading west.


﻿
﻿
After spending a few weeks in the Scottish Borders between Langholm and Kielder Reservoir Sid  made a pit stop on Langholm moor before continuing South West..  Is this just a foray to the west of the moor or could he be heading further afield across Dumfries & Galloway, even following Miranda's route from 2013, Isle of Man and onto Ireland? Watch this space...


From the southern part of the moor  (Whita Hill) you can see as far as the northern end of the North Pennines AONB,  the northern peaks of the Lake District, the tip of the Solway and the Criffel at Dumfries.. This would have been what Sid saw and maybe what enticed him to explore a little further.

Annie is favouring ground in the very south of South Lanarkshire Posted by catbarlow at 09:39 No comments:


A couple of stunning shots of the moody skies over Langholm by local photographer Tom Hutton.
﻿
﻿


Hattie and Grainne are staying home

Since fledging from nests in summer 2013 Hattie and Grainne have not wandered far from the moor.  Typically as the weather gets colder in the autumn and their avian prey moves to lower ground, so do to the harriers. The winter of 2013/2014 was very mild and this could have influenced Hattie and Grainne to stay on the moor rather than move away as we might expect.   Hattie and Grainne are running true to form at the moment and have remained on the moor since raising their broods this season, but whether that could change if the weather turns colder .. we'll have to wait and see.

Annie's return home to Langholm moor in mid August was brief. After just a day or so Annie flew north West towards Tweedsmuir  near where she had visited earlier in August and then onto Wintercleugh, South Lanarkshire. It would be so interesting to know what is driving Annie to explore when her mother, Grainne, has never left Langholm moor.

Sid is the young male harrier that was tagged in July 2014 on Langholm. Many thanks to RSPB for this data. It is great to know Sid is alive and well and has been spending much of his last month or so on the east side of the moor near Newcastleton and venturing east over the border into Northumberland towards Keilder. In the past it has typically been the male birds that have ventured further afield (for example McPedro, who wintered in Spain) but so far Sid is staying fairly close to home.

Miranda is proving to be a real Enigma.  After sporadic data transmissions over the winter (likely due to poor weather conditions) it is several weeks now since data was last received from her tag. Colleagues in Ireland have done great work in trying to locate her, and there were some potential sightings of Miranda  around 10 days after that last transmission. I'm told it is possible that moulting feathers may be covering the solar panel on the tag interferring with recharging, if we hear more or if  her tag begins to signal again we'll post here.

If you enjoy following the movements of the satellite tagged Langholm harriers you now have the opportunity to do the same with tagged harriers at Bowland   http://www.rspb.org.uk/community/ourwork/skydancer/b/skydancer/default.aspx   and Peak District   http://www.wildlifetrusts.org/blog/thewildlifetrustsblogger/2014/09/04/return-hen-harrier.
Posted by catbarlow at 05:47 No comments: